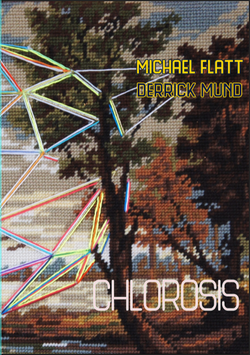 "So often our urgencies upend themselves into absurdities. Lyric turns to joke and then to pugnacious elegy. So in Flatt’s and Mund’s Chlorosis, a dying world becomes a dynamic collaboration. Given options that find us 'limping toward stasis,' this poetry reanimates and throws color and light on a dimming horizon. Can poetry save us? Maybe not. But perhaps what we need now is sustenance, not salvation. Both slapstick and delicate, Chlorosis sustains the witness necessary to this moment. Now, in this 'fugitive dimension,' we are borne on 'an absent violence,' 'still and waking for that which we lack / from which to emerge.'" —Elizabeth Robinson

"In these poems, Michael Flatt and Derrick Mund flicker between digital screens and imperceptibly crumbling landscapes to create a series of nameless glances cast at a contemporary psychic abyss. Here, Chlorosis reads like a thread of linked pastorals—eulogizing the living room of a broken American heart—choked by sunlit swarms of dust motes and a soft, semi-urban dread." —Janaka Stucky

"Chlorosis is a moving experiment in the uses of the poetic ‘we’ in a time of crisis. It hangs tight—it usually means just two people. The component members of that ‘we’ write to each other, as each other, and for each other. And as they survey together a world in which there is no respite from the oncoming disaster, that ‘we’ becomes a tiny, nimble pivot for unexpected clarities and also for the testing out of tentative rhythms—both of which we’ll all be needing, from here on out." —Christopher Nealon 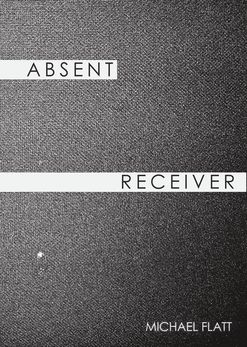 “I can only say, this is the species of poetry we desperately need today.” —J. Michael Martinez, in his recommendation for the Poetry Society of America's list of New American Poets

“Sparking with desire, anger, wit, and intelligence, this brilliant book refuses to still. Lines ricochet back and forth across the page; this is “the dialogue of the mind with itself” amped up, charged and singing. Flatt’s voice is terrifically awake to the subtleties of emotion without ever becoming solipsistic. Rather, longing is constantly refracted against precisely rendered details of the world out there: the “swing of the red sun burning,” the fallen tree a “pitchfork bouquet.” Street, barroom, bedroom: all brilliantly observed, transformed into lines thrillingly alive. With an ironically tinted audacity that reminds me of Apollinaire or Schuyler, Flatt makes Eros a way of seeing, a reason to write.” --Julie Carr

“If signals were sent from a large melancholy dial, Michael Flatt has the code broken. It only appears melancholy, a note reverberating along goose bumps of the future not being the future we once thought it to be. Levels of cool air across open fields share space with mouths of mic and speaker, one breathing in, the other out. It’s a sensationalway to the poems Michael Flatt has for us, dressed up to dress us all down. You want to record them to play them backwards for the uncolonization of where the mind mistakenly thinks it’s encircling the lines.” --C.A. Conrad